Exhibit at the Eiteljorg Museum

“Our Land is not about museums, governments, agencies, offices, or curators. It is about Inuit artists and their work.” – exhibition catalogue

The Eiteljorg Museum of American Indians and Western Art is happy to announce the upcoming exhibition Our Land: Contemporary Art from the Arctic.

In a historic move, the government of Canada redrew its map in 1999 to create Nunavut from the Northwest Territories.This marked the transfer of governmental power to a majority Inuit population. Nunavut means “our land” in the Inuktitut language and encompasses most of the Canadian Arctic, spanning from the Hudson Bay to the North Pole. This region has been home to Inuit since ancient times and the works of Our Land explores a time of escalating artistic and cultural awareness and pride among Canada’s Inuit. 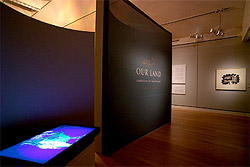 Today, Inuit art includes a wide range of media found in public and private collections in Canada and other parts of the world. Our Land is able to illustrate to visitors the varied and unique works of Inuit artists such as Germaine Arnaktauyok, Kenojuak Ashevak, Pitseolak Ashoona, Pudlo Pudlat, Jesse Oonark, Zacharias Kunuk, and Lucie Idlout. Carvings, prints, and video installations all share the same space in a stunning visual example of a thriving and evolving artistic culture. The outstanding creative achievements of such artists have spurred economic and social development in their communities.

This exhibition features a companion award-winning catalogue that includes a DVD containing video footage of the 1999 Nunavut treaty signing, elders discussing Inuit Qaujimajatuqangit, and contemporary Inuit music. Copies of the catalogue can be purchased from the White River Trader.

The exhibition can be found in the Eiteljorg Museum’s Special Exhibits Galleries from November 15, 2008-February 15, 2009. Opening weekend activities will include the creation of a Inukshuk, a man-made stone landmark or way finder,on the museum’s grounds by Inuit artist Peter Irniq and native throat singers. For more information please contact the museum at (317) 636-WEST.

» See a preview at our 2008 Annual Meeting in Indianapolis.

The 2021 Annual Meeting of the Inuit Art Society will be held in Vancouver, Canada.