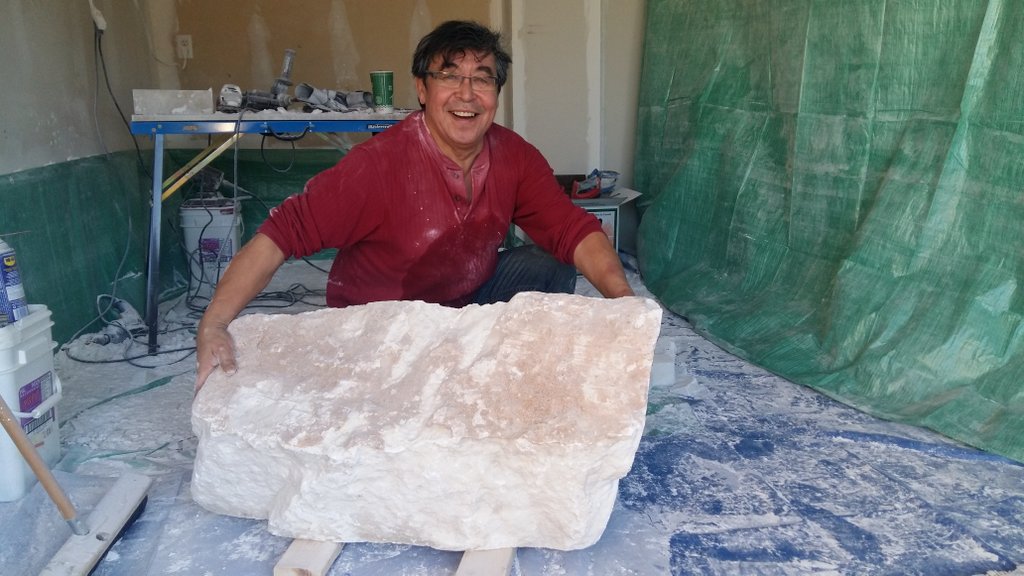 Bill Nasogaluak is an Inuit artist born in Tuktoyaktuk, Northwest Territories, Canada in 1953.  He started drawing at a young age then transitioned into painting.  For many years, he practiced his art in his spare time while he worked as a certified electronic technician.  He then became a full time artist in 1992 and focused primarily on sculpting.

His artwork mainly represents interpretations of what he knows best; his Inuvialuit culture, the mythology and traditions of his people, the relationship between the land and wildlife, and the struggles facing the Inuit past and present way of life.  Bill tells the stories of Inuit legends and struggles through the use of metaphors and symbolism.

Bill has pursued many avenues along his chosen career path, such as teaching art at the Arctic College and competing in ice carving in Burges, Belgium. He has been a judge for the De Beers ice carving competition in Yellowknife, and has participated as a competitor in the past.  He has worked with his brothers in snow carving competitions held annually in the Winterlude Carnival in Ottawa, winning The Canadian National Snow Sculpture competition in 2002, and winning the Artists Choice Award several times.  He also holds the honor of being a recipient of the Golden Jubilee Metal.

He has participated in and led many collaborative projects. He was the lead in the design and production of the new Ceremonial Mace for the Northwest Territories legislature after the land negotiations in 1999.  He participated in the creation of the commemorative sculpture to celebrate the 10th anniversary of the Great Northern Arts Festival in Inuvik. He also has Inuksuit installations in Japan, Guatemala, Mexico, India and Peru. In addition, he was an artist in residence in Arles, France in 2017.

Bill has a sculpture on display at The Prince of Wales Museum in Yellowknife, N.W.T., at present has pieces at the Art Gallery of Ontario, Toronto, Ontario, and has had pieces at The National Gallery of Canada in Ottawa, Ontario,  in the “Inuit Sculpture Now” exhibition.  In the last 18 months, his sculptures have been shown in art shows in Sweden, France and Canada. One of his sculptures was voted collectors choice in the Inuit Art Quarterly in 2017.  His work is collected throughout North, Central and South Americas, and Europe and has been given as gifts to such people as Prime Minister Jean Chretien.

Bill has been interviewed by National and international media, has been published in newspaper, magazines and multiple books on Inuit art.  He is a true Renaissance sculptor in modern time.