The annual meeting began with a lovely private reception at the Eiteljorg for members of the Eagle Society of the Eiteljorg Museum and IAS registered attendees for the opening of the museum’s three month exhibition, “Our Land – Contemporary Art from the Arctic”.

Three Inuit guest artists were also introduced and performed for those in attendance. They were throat singers Kendra Tagoona and Charlotte Qamaniq along with drum dancer and artist, Peter Irniq. Peter’s remarks were of particular interest.

Peter, who was born in an igloo and spent his first 12 years living with his mother, a carver and seamstress and his father, a hunter, was then sent off to a residential school where he learned to speak English. Because of his dual language skills and advocacy on behalf of Inuit language and culture, Peter helped to create and has been very active in the government of Nunavut. As a part of that government, Peter has worked to create economic opportunities especially for the young and teach them Inuit culture so that they, like him, can become world-wide ambassadors. His travels as an Inuit native and advocate have taken him from Buenos Aires to Mongolia!

As a hunter, Peter has had direct experience with increased pollution in the Arctic (the “last frontier in the world”) and global warming. He talked about the disappearance of the glaciers and the “old ice”, the fact that Hudson Bay is freezing one month later than normal, polar bears encroaching on communities in search of food, the appearance of new birds in the Arctic like robins, and the increased danger of falling through thinning ice.

Peter’s drum dancing along with the unique and mesmerizing throat-singing of Kendra and Charlotte was the highlight of the evening.

Lorne Balshine has served for the past 25 years as the President and Director of the Arctic Art Museum Society, although his involvement with Inuit art spans over 40 years. He has worked tirelessly to promote contemporary Canadian and Greenlandic Inuit art by staging exhibitions and producing educational programs on the subject. He is one of the foremost collectors of this art form on the North American continent.

In his presentation, Lorne talked about how the first pieces of Inuit were both decorative as well as functional in nature (e.g. hair combs, amulets, and tools). After contact with Europeans, Inuit art entered what is known as its contemporary period which technically covers the last 60 years beginning with the 1950’s. James Houston, who recently died in 2005, was the individual who did the most to promote Inuit art and bring it to the attention of the outside world. Along with Houston, the Canadian government in the early 1960’s started to promote Inuit art and developed the “Igloo” tag to insure correct artistic attribution and reduce the opportunity for counterfeit pieces. The first permanent collection of Inuit art was established by the Toronto Dominion Bank.

As this art form grew, individual artistic styles developed along with style similarities between Inuit communities (e.g. Cape Dorset). Interestingly, there is no word for art in the Inuit language. Rather, Inuits produce likenesses of things….which we call art. Lorne was careful to caution the audience that Inuit art should never be considered a handicraft, but rather fine art.

The balance of his presentation covered his personal collection and the various themes around which it is built. They include: wildlife, hunting and survival, community and family life, mother and child, games and athletics, spiritual beliefs (e.g. shamanism), drum dancing (the drum is the singular instrument of the Inuit), legends and acculturation (e.g. Christianity, global warming).

Lorne believes that film making will play a prominent role in the future evolution of Inuit art.

John is a wilderness and Arctic expeditioner, experiential educator writer, world traveler and fledgling historian. In the past few years John has also completed two multi-week winter expeditions on Hudson Bay and taken every opportunity to travel in the Arctic and sub-Arctic regions. During the 2006/2007 winter, John lived on Baffin Island for four months working as the expedition base camp manager for the Global Warming 101 Expedition led by Will Steger.

In his presentation, John recounted how his day-to-day responsibilities in remote villages placed him in close contact with social, economic, and personal lives of numerous Inuit and their families. He introduced us to a number of interesting Inuit individuals, one gentleman whose tolerance for the bitter weather exceeded all reasonable expectation. Despite climatologically extreme conditions and scare resources, John frequently was touched by the humor and generous spirit of the residents of Baffin Island.

John also touched on his experiences exploring the South Pole and strongly recommended The Last Place on Earth by Roland Huntford as a great read.

In between the two presentations, there were additional throat-singing performances by Kendra and Charlotte.

Throat singing, which is present in other cultures (e.g. Mongolian) as well as the Inuit was developed by women as an amusement while the men were out hunting and gone for long periods of time. It is typically sung by a pair of women who stand close together, facing each other, and holding on to each others arms. The song continues until one of the pair breaks into laughter. Kendra and Charlotte, both in their 20’s, feel strongly about the perpetuation of this art form and have become accomplished performers.

Below is an example of throat singing, although not by Kendra and Charlotte.

If you don’t see the video, download this plugin or go here to watch the video.

Also at this time was the construction on museum grounds of an inukshuk by Peter Irniq. An inukshuk is a marker made from stone which is typically built to alert Inuit to the presence of good hunting or fishing places.

After a day of listening, learning and watching the artists at work, we took a breather before regrouping in the evening for cocktails and then the traditional

Saturday evening group dinner which was held at the Hollyhock Restaurant in Indianapolis. As always, the atmosphere was warm and very jovial. And the favorite topic of conversation of was… Inuit art!!! IAS members were particularly gratified by the comments of Inuit artist Peter Irniq who expressed his willingness to partner with the newly formed IAS advisory board chaired by Eliot Waldman.

Attendees had one last opportunity to visit the IAS Marketplace featuring Inuit art for sale from Native Art Traders, Skokie, IL. Eliot Waldman, owner and IAS member, presented a large, quality selection of sculpture and other items which he personally buys on his trips to Canada.

Keynote speaker, Lorne Balshine, made a second presentation entitled “30 Years Attending Waddington’s Inuit Art Auctions”. Lorne, whose continuous attendance record at Waddington’s is probably unsurpassed in the collecting community, shared his unique perspective of how the auction process, art and prices have evolved over time. Of most interest was the escalating recognition of Inuit art as a fine art form and the concurrent rise in prices. While most prices, even today, are well under the $50,000 mark, it was interesting to see a piece, currently the high water mark, which commanded in excess of $280,000.

At the business meeting Janet Beylin of Michigan was elected as a Board Member-at-Large.

Attendees had the opportunity to view the award-winning film by John Houston, “Kiviuq…The Secret Bible of the Inuit.” 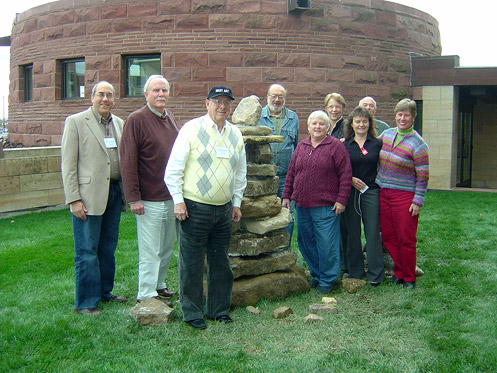