Snapshot of the Meeting

The Inuit Art Society, in association with the Dennos Museum, is proud to welcome John Houston, Kananginak Pootoogook and Jimmy Manning to Michigan this fall! These eminent figures will share their art, experience and culture with visitors of all ages…Read more

First, they will present to both members and the general public at the IAS Annual Meeting, and then travel north to the Dennos Museum. This partnership allows these remarkable artists to reach audiences in both the Metropolitan Detroit and Traverse City areas.

The IAS’ Annual Meeting, titled “Bridging Cultures, Bridging Time,” will take place on October 8, 9, and 10, 2010. This year’s host location is the Cranbrook Institute of Science in Bloomfield Hills, Michigan – recognized as the site of the first public exhibition of Inuit art in the United States (fall 1953). The Institute has a collection of carvings and other objects that date from the 1950s and early 1960s, most of which came directly from James Houston and/or Eugene Power’s Eskimo Arts Inc. We will be mounting an exhibition of these seldom-seen pieces so that their story can be told.

The IAS has selected John Houston and Kananginak Pootoogook as our featured speakers/presenters. John has made a number of award-winning films – his latest, “The White Archer,” an adaptation of an Inuit legend, has just been completed after almost two years in preparation. Kananginak Pootoogook is of course a highly respected sculptor and printmaker, as well as esteemed Inuit elder. Widely decorated, Kananginak received a National Aboriginal Achievement Award this spring, and his prints are currently the subject of an exhibition at Toronto’s Museum of Inuit Art.

John and Kananginak fit well with both Cranbrook and the “Bridging Cultures, Bridging Time” theme. Both John and Kananginak were there, more or less, when James Houston was promoting Inuit art and bringing it to the outside world. One represents the Houston family, one the Inuit. They were close then, and they are close now some 50 plus years later. Both play major roles in the Inuit world today, in very different ways. They can speak with first hand knowledge about Inuit culture of the past and present, of the journey and evolution of Inuit art, and of contemporary prints and sculptures.

In addition to our featured speakers, we have invited Jimmy Manning, who is also well known as the long time studio manager of the Co-op in Cape Dorset. Jimmy will travel with Kananginak to provide translation services, and will also demonstrate printmaking and lecture independently as well.

In accordance with our “Bridging Cultures, Bridging Time” theme, the IAS will also incorporate a small segment on travel to the Arctic. While relative isolation has defined the Inuit way of life, we hope to offer our members possibilities for seeing this special culture first hand.

We believe that John, Kananginak and Jimmy provide a unique synergy and a wonderful opportunity to bring a top quality Inuit art and cultural experience to Michigan. With the association between the IAS and the Dennos Museum, audiences in two cities will be able to benefit from this exceptional program. We invite you to join us.

Bridging Cultures, Bridging Time is a collaboration between the Inuit Art Society and The Dennos Museum Center of Traverse City, MI.

A word about the Cranbrook Institute of Science. 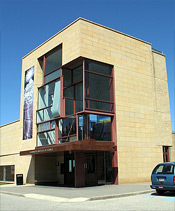 Did you know it was recognized as the site of the first public exhibition of Inuit art in the United States (fall 1953)?

The Institute has a collection of carvings and other objects that date from the 1950s and early 1960s, most of which came directly from James Houston and/or Eugene Power’s Eskimo Arts, Inc.

The Institute will be mounting an exhibition of these seldom-seen pieces so that their story can be told during the annual meeting.

The internationally renowned Cranbrook Institute of Science in Bloomfield Hills, MI, is about 20 miles northwest of downtown Detroit.

The Museum holds a small collection of sculptures from James Houston and Eugene Powers which is rarely displayed, but which Cranbrook has agreed to share with IAS members.

IAS Board Member, Janet Beylin, is the Conference Chair.

The 2019 Annual Meeting of the Inuit Art Society will be held in Ann Arbor Michigan on October 25-27.