The Necessities of Life, a 2008 film directed by Benoît Pilon, tells the story of an Inuit hunter with tuberculosis who goes to a sanatorium in Quebec City. 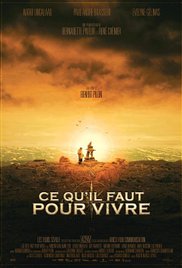 Synopsis: In 1952, an Inuit hunter named Tivii with tuberculosis leaves his northern home and family to go recuperate at a sanatorium in Quebec City. Uprooted, far from his loved ones, unable to speak French and faced with a completely alien world, he becomes despondent. When he refuses to eat and expresses a wish to die, his nurse, Carole, comes to the realization that Tivii’s illness is not the most serious threat to his well-being. She arranges to have a young orphan, Kaki, transferred to the institution. The boy is also sick, but has experience with both worlds and speaks both languages. By sharing his culture with Kaki and opening it up to others, Tivii rediscovers his pride and energy. Ultimately he also rediscovers hope through a plan to adopt Kaki, bring him home and make him part of his family.

The 2019 Annual Meeting of the Inuit Art Society will be held in Ann Arbor Michigan on October 25-27.